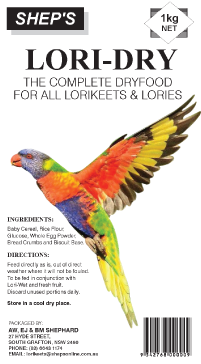 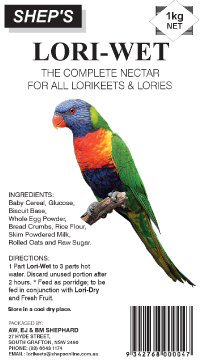 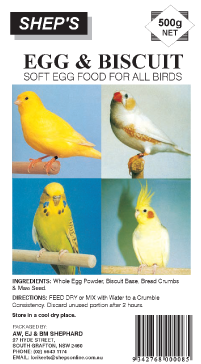 Ken and Lyn Shephard have been aviculturists for more than 30 years, specialising in Lorikeets and Lories. Ken has been instrumental in breeding the Pied Rainbow Lorikeets, which are now common in aviculture. Ken and Lyn were also part of the second legal importation of parrots into Australia, bringing Buru Red Lories to the country.

They have successfully bred every Australian Lorikeet for numerous generations, developed Rainbow Lorikeet mutations and have bred many exotic Lories. Early on they bred for the Pet trade, hand-rearing countless babies from their collection of more than 80 breeding pair.

Being well read, their knowledge on Lorikeets and Lories is vast, and is based on decades of practical experience.

As with any Lorikeetist, striving for perfection with birds, diet and accommodation is never ending.

In developing an appropriate diet for captive lorikeets, one must look at the composition of their natural diets, this being pollen (dry food), fruit and plant matter, and nectar (liquid food).

As seasons change, so do the ratio of pollen, fruit and nectar to each other, however, the total energy requirement for wild birds far, far exceeds that of captive birds.

In 1987 Stan Sindell released his first book 'Australian Lorikeets'. This was the first Lorikeet book dedicated to Australian lorikeets. Up until then all other literature was on foreign lorikeets and lories, and diets were a hit or miss affair. Together with avian veterinarian, Dr Jim Gill, they set about testing all the accepted diet recipes and designing a complete diet which would cater for all Australian lorikeets. The goal was that this diet would maintain the birds health, they would breed, their offspring would be healthy and would breed and their offspring would be healthy and would breed. This designing and testing phase took more than a decade.

Lori-Dry: With the release of Stan’s book, dry food diets for lorikeets and lories exploded. The base ingredient in the recipe was Rice Flour and Baby Rice Cereal, as opposed to Wheat Flour in many other diets, with the added advantage that the dry mix would not spoil or sour in hot, humid weather.

In 1988 Shep’s registered the trademark Lori-Dry and began commercial manufacture. In the early years several areas of concern became apparent. Firstly, the use of Pollen in the recipe was causing issues with storage of the end product and was thus removed and replaced with additional Whole Egg Powder to maintain correct protein level. Furthermore, the Baby Rice Cereals on the market were fortified with an iron supplement; whilst not proven beyond doubt, some foreign lories were displaying Liver problems believed to be from a build-up of the iron mineral. Shep’s moved to a Baby Food manufacturer that did not fortify their product with iron.

Commercial Egg and Biscuit mixes in Australia were based on Bread crumbs mixed with custard powder (0% Protein), and if you were lucky they may have contained some Poppy seeds. But NO Whole Egg Powder (21% Protein and a complete protein i.e. it contains all 22 amino acids) and no biscuit base. Shep’s needed to manufacture their own quality Egg and Biscuit, which includes Whole Egg powder and ‘Nice’ biscuit base.

Lori-Wet: Back in 1988 there were two basic substitute ‘Nectar’ diets. One designed for the larger lorikeets: Red Collareds; Rainbows; Scalys; and Musks. The second catering for Varieds, Littles and Purple-crowneds. These two diets were algamated. Again, based on Baby Rice Cereal, Whole Egg Powder and Skim Milk Powder, digestibility and completeness were ensured. This was backed up with years of trials, featuring the ‘softest’ of the Australian Lorikeets, the Purple-crowned, and years of hand-rearing lorikeets for the Pet Industry. Many ingredients were discarded along the way, especially soy and soy related products. Lessons learnt from Lori-Dry meant excess Vitamins and Minerals were not going to be an issue.

Egg and Biscuit: As detailed in the Lori-dry story, the quality of most of the commercial Egg and Biscuit mixes in Australia is very suspect. Some manufactures even stooping to add crushed ‘Twisty’ seconds to increase the yellow look (what yellow food colouring and MSG do to your birds I don’t know). Custard powder smells like vanilla so if your Egg and Biscuit smells this way you know it’s cheap.

So, from the beginning, with Stan Sindell and Dr Jim Gill, to now, Shep’s products have sold many millions of kilos. Our products have been successfully used for countless generations of breeding cycles on all Australian lorikeets and exotic lories, and are sold in every state in Australia as well as being exported overseas.
Jurong Birdpark, the second biggest birdpark in the world, has been a long-term supporter and customer of Shep’s.